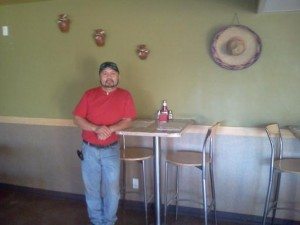 Carlos’?Restaurant is now serving homemade pizza. ?Come by and check it out today!

Carlos and Leticia Cortez have created an enjoyable family restaurant for the town of Alamo and have big plans for the future of the business.

Carlos’ Restaurant is the fulfillment of the Cortez family’s long-time dream to own their own restaurant. ?Carlos gained much experience working as a cook, both in Las Vegas and Alamo after he moved here ?in 2002. ?Last year, an opportunity presented itself, and in April 2011, Carlos’ Restaurant opened for business with a menu of both Mexican and American dishes.

Since then the Cortezes have worked hard to make the restaurant something community members would love, according to his daughter Claudia Cortez, who works at the restaurant.

“He feels like this is the town’s restaurant,” she said, adding that the community really embraced the business.

Fundraising events, like “FFA Night” and “Tip-a-Cop” moved to Carlos’ this year and didn’t miss a beat. ?In fact, Tip-a-Cop brought in over $1,000, according to Claudia.

The Cortezes want to continue supporting the community, whether it’s hosting events, creating jobs, or just providing an atmosphere that families in Alamo can enjoy. They feel thankful to be part of this community and?wish to someday expand both the size of the restaurant and the menu.

“They are just so pleased,” Claudia said. ?”They are so thankful for everyone in town.”

Big plans are in the works for the restaurant’s one-year anniversary on April 14th – including a mariachi band and giveaways.