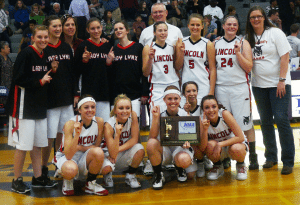 When Lincoln County High School girls basketball head coach Lori Cheeney was congratulated on a great season, she quickly corrected, ?It was all the girls! It wasn?t me at all!?

The Lady Lynx went undefeated up to the state tournament this year. The girls enjoyed the hard fight and won a regional championship. The road to success has been paved by bumps and bruises, acting up of old injuries and hard work along the way.

Tia Florence’s and Nicole Florence’s injuries threatened to return, forcing the team to learn new strategies. There were tough, physical games against teams such as Needles and Enterprise. The team grew closer together during long, weekend bus trips. And then there was the one-point win during the regional semifinals leading to the regional championship title. These bumps and bruises made the players, and team as a whole, stronger.

What made the biggest difference this year, according to Cheeney, was not only how hard the girls worked but ?the good attitude towards that work. They also are willing to learn new everything and be willing to try new things and to make those changes.?

Coach Cheeney will be returning, and next year’s players will be working on shooting, defense, passing and basic fundamentals of the game in the off season.

?We have a well rounded team,? Cheeney said. ?Not all of them young or older on the team. We have a good mix of talent and young members.? If all return, the team will have four seniors next year and three will be juniors. Cheeney said next year’s group will continue the good attitude and become even more advanced as ball players.