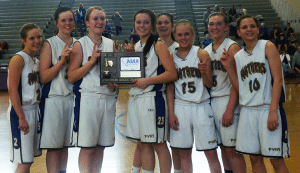 The key to both teams continuing to churn out championship seasons is hard work, desire to win, and close-knit community.

For Panthers girls head coach Amy Huntsman, it was a bitter sweet moment as she coached two seniors, Kyla Mortensen and Halie Lewis, for the final time. Huntsman is wrapping up her 18th year coaching. ?When it get?s to be not fun anymore, I will retire,? she said. This year was a lot of fun. The kids worked hard, wanted to win, a very cohesive team. They were a very easy team to coach. It?s easier when they all like each other.?

Mortensen has had six state titles under her belt, winning three each in volleyball and basketball, and is going for number seven on the Panther softball team. She says it?s all a ?winning tradition? that pushes her to achieve her goals. ?We get along so well,? she said. ?I see other teams fight, and argue and I think it really doesn?t help anything. Just get a long and work as a team. Work hard to win.?

Meanwhile, the PVHS boys graduated much of their offensive power from last year’s team, so players had to learn new leadership roles.
Head coach Brian Higbee said he had to become accustomed to a lower point production, but he also felt the team had a great chance to three-peat because of the way the players worked, especially on the defensive end.

Senior guard Chase Hansen said Coach Higbee taught him not only everything he knows about basketball, ?but also to expect nothing less than perfection from myself.?

He added, ?Not just about basketball but about life lessons.?

Most likely, one of the lessons this year was to never give up, despite hardships. And the Panther boys had a few. They lost starting senior forward Kade Wadsworth to a knee injury early in the season and at first didn’t expect to get him back. But players like Mason Stirling and Ethan Simmers filled the void while Wadsworth rehabbed, while senior Derek Hansen led the way by punishing players inside. Wadsworth returned a few weeks prior to the playoffs and the team seemed stronger, both because they had a great player back and because they then had more experienced players coming off the bench.

There were also tough losses, including one to Spring Mountain in the regional championship game. But the Panthers once again looked only stronger for it as they defeated a talented McDermitt team in the semi-finals and then throttled Spring Mountain for a third straight title.

With hard work, team work strong values, and great players coming back, it looks like many great things are still to come in the PVHS basketball programs.