You are here: Home / Uncategorized / Local resident one of the most influential in scouting 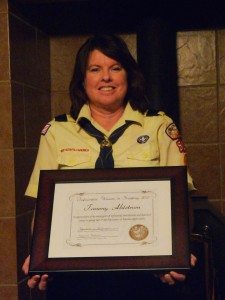 Long-time Lincoln County resident Tammy Ahlstrom has been recognized as one of the most influential women in scouting in this region.

Ahlstrom is a very involved mother of seven, including three boys. She became involved with scouting as her boys began attending. Twenty-five years later, she is still very much involved with the scouting program and has held many different positions through the years.

For all of her hard work, she is this year’s recipient of the 2012 Influential Women in Scouting award. This prestigious award, which became part of the scouting program two years ago, is given annually to eight women in the area. It is given by the District Advancement and Recognition committee and was presented to Ahlstrom at a recent banquet held in in St. George, Utah. The local level first nominated her, and then the selection process went to the area council.

The draw to scouting for Ahlstrom is ?teaching [the boys] character and good values,? she said. ?All three of my boys are eagle scouts.?

She added, ?Teaching them to respect yourself, the country and others, this program applies to all boys.?

The Boy Scouts of America is a program designed to help teach boys about a variety of life lessons. They learn everything from cooking to survival skills to sports they might be interested in. It teaches boys a variety of things like where rain comes from, what plants are poisonous, how to ride a bike safely, and how to survive in a disaster situation, just to name a few.

Ahlstrom hopes the public understands that ?this program helps boys become honorable men. It prepares them to have fun in the process of learning. The boys have to set goals and accomplish those set goals, and then are rewarded for that. The scouting program prepares you for life.?