You are here: Home / Departments / Cover Stories / Skyler & Brittany: Hope and Faith in the Face of Adversity 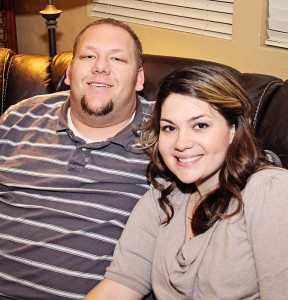 Skyler Smallwood has always been the big guy with a big heart. He is the son, brother, and friend that everyone loves to be around; and more recently, the loving husband and father.

Born and raised in Alamo and currently living in Las Vegas, Skyler is more comfortable on the giving end than the receiving. That was evident on the 4th of July 2012 in Alamo, when he and his family did a gun raffle and raised thousands to help a cousin fight cancer. Skyler was amazed at the generosity coming from his home town. He did not know that a few weeks later he would experience the same outpouring as he faced his own trial.

Life was going pretty well for the big fella. In 2009, he started dating Brittany Olsen, a Vegas/St. George girl he met at church. Mutual friends were trying to set him up with a different girl, but he wanted to meet Brittany instead.

She thought he was a little stuck up at first, but that first impression soon dissolved. ?Anyone who knows him knows he?s anything but that,? she said. ?He?s the sweetest most genuine person and I?m glad I was able to get past my first opinions!?

They quickly knew they were right for each other. ?She went to Italy for two weeks with some friends, and that?s when I thought, alright, this is enough,? Skyler said. ?I?ve got to marry this girl so she can?t go on vacations without me anymore.?

They married in March 2010. As 2012 rolled around, they were expecting their first child.

Around that time, Skyler landed a job at the Nevada Test Site. This meant a steady paycheck and benefits, something he had been without since being laid off in 2009. It also meant his dream of moving his young family back to Alamo was now a real possibility. He could give his children the same great experiences he had growing up.

?You don?t realize how good you had it until you?re gone,? Skyler said as he reflected on his experiences growing up in the Pahranagat Valley.

Always heavyset, his weight had increased over the years. With his new health insurance, he began the process to undergo weight loss surgery. As the doctors put him through a series of tests, they found problems related to his kidneys and referred him to a specialist. At first, their doctor hoped the problem could be monitored and controlled with medication. However, on July 31st, Brittany received a phone call. The doctor told her that Skyler?s kidneys were hours away from shutting down and to get him to the hospital immediately.

Skyler was at work when the call came and didn?t realize how serious the situation was until after about a week of waiting for test results. He was diagnosed with IgA nephropathy, which had progressed to end-stage kidney failure. He was told he would need to receive a kidney transplant.

?We were in the hospital for so long, it gave myself and my wife and my family plenty of time to expect the worst or expect the best,? Skyler said. ?Either way, we were going to work through it.?

There certainly have been difficult days since. Skyler needs dialysis three times a week for six or seven hours each time and has been unable to return to his job. He has changed his eating and exercise habits to lose enough weight to qualify for a new kidney. But despite these difficulties, Skyler and Brittany focus on a string of blessings that have come.

An outpouring of support has come from the community. ?My family didn?t call anybody,? Skyler said. ?People in the community just volunteered to do all this stuff. It was awesome to experience that.?

An account has been set up at the Pahranagat Valley Federal Credit Union called the ?Skyler Smallwood Kidney Fund?, and many have deposited money there. Doughnut sales, bake sales, a Pampered Chef fundraiser, a 5K, and an auction have been put on, raising close to $18,000 to help with medical costs.

Additionally, Skyler said many have volunteered to give him a kidney if they are a good match.

?I wasn?t a huge fan at the prospect of moving to Alamo eventually, but after this and seeing the generosity the people of Alamo offer, it makes me want to live there sooner than later,? Brittany said. ?We can?t thank the people who have helped us enough!?

The Smallwoods have also found great support in from their churchcongregation in Las Vegas. A church leader is organizing a program forpeople to volunteer to see if they are a possible match.

Skyler and Brittany?s faith has been solidified, and they see no coincidences in the way events unfolded. What if he hadn?t received that job? What if he hadn?t had those tests done? He probably would not have known the shape his kidneys were in until it was too late.

?I always thought my faith was pretty strong, but it became a lot stronger when this all happened.? Skyler said. ?The big man upstairs would have had to be involved, or I wouldn?t have been here.?

Brittany?s pregnancy and the birth of a healthy, baby boy has also been a source of strength and joy.

?I was 6 months pregnant when Skyler was diagnosed,? Brittany said. ?Being pregnant was probably the best thing for me because it kind of forced me to be the strong one for the baby?s sake.?

The new parents were overjoyed when the baby arrived. They say their perspective on what?s important has changed even more since.

?There?s not a better feeling in the world when you hear your kid scream for the fist time,? Skyler said, adding he gets a kick out of watching his son grow and learn.

?With this kid I?ve become a different person,? Brittany said. ?I?ll wipe his boogers or slobber with my hand or shirt and it doesn?t even bother me!?

Another blessing has been a greater ability to forgive and seek forgiveness. A grudge Skyler had harbored for years suddenly seemed petty. ?Realizing how close I was to actually dying, and my Heavenly Father was the reason I was still here, I stepped back and thought that I need to work on myself if I want him to help me,? he said.

He e-mailed the person and apologized.

Skyler and Brittany have learned much about taking care of their bodies, by eating healthy, low-sodium food and exercising.

?We?ve completely changed the way we eat,? Brittany said. ?No fast food and we hardly ever eat out because not a lot of places accommodate his diet.?

?It?s getting me to change up my lifestyle and change my life.? Skyler said. He has lost over 100 pounds so far and has 25 pounds to go before he begins the process for a transplant.

If he finds a donor match, he will have a new kidney in a few months. If he can?t, it is a two-to-four year wait for a ?cadaver kidney.?

Though there are still hurdles, the experiences of the last seven months have filled the Smallwoods with strength, faith, and gratitude.

One doctor told Skyler he would hire him as a tag team partner, where the doc would work on healing the patients and Skyler would cheer them up.

?You always hope that stuff like this doesn?t happen to you, like you feel invincible, until it does happen to you,? Brittany said. ?I felt invincible. But if anything, this ordeal has taught me to be grateful for your health and to keep your loved ones close. And don?t get mad at the little things because at the end of the day, well for me anyways, those little things don?t matter! You have the greatest gift and that?s life, live it to the fullest.?

The Smallwoods plan on being advocates for those suffering from kidney problems. Brittany wants to ?get with some food company and make foods at the supermarket or meals at restaurants that are convenient for people on dialysis or with this kind of diet.?

They also plan on continuing an annual 5K with proceeds supporting those dealing with kidney disease. ?We want to do that every single year from now on,? Skyler said. The money will be donated to the Kidney Foundation. They are looking to do it in the springtime this year.

Skyler?s future plans are centered around living well and taking care of his family. He intends on finishing losing the weight, getting his transplant, and ?living a healthy lifestyle for the rest of my life, so I can be around for my wife and kid, or kids.?

?I tell everybody that the only reason why I?m here is because I need to be here to raise my boy to be strong in the church and to respect his mom,? Skyler said. ?That?s my major goal with him to hopefully lead him in the right direction.?