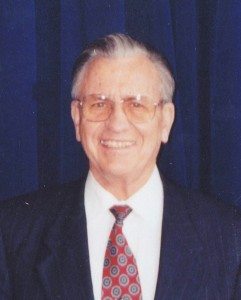 On Dec. 31, 1927, in Minersville, Utah, Clark Maurice Hardy was born to Emma Elizabeth Davis Hardy and Arthur Orwin Hardy. He was the last of four sons and two daughters to be born into this family.

The family later moved to Gunnison, Utah, where Clark grew up and attended school. His mother passed away when he was just ten years old. Even early in life, he was no stranger to hardships or hard work. He came from a family of ?DOERS? and his life demonstrated he firmly believed that working hard brought both success and joy into his life.

Clark was a very good athlete and in high school he was successful in both track and basketball. He later played basketball for the college in Cedar City, Utah, which was then known as BAC.
The mother of his good friend, Cecil Bown, took him under her wing and became a second mom to him. Due largely to the teachings and example of the Bown family, Clark joined the Church of Jesus Christ of Latter-day Saints when he was sixteen.

After graduating from Gunnison High, he enlisted in the United States Marine Corps. He completed basic training and was preparing to serve in the Pacific Islands when the war came to an end. After nearly a year and eight months, he was discharged.

When he returned home, he attended the BAC in Cedar City, Utah. There he met the love of his life, Marian Louise Stewart. He soon married this Nevada girl and they eventually had four children: Clark M ?Rick?? Hardy, Leslie Gaye Hardy (Haberle), Sandra Kim Hardy (Dew, Gardner) and Arthur Wayne Hardy.

Clark moved his family to Salt Lake City, Utah, for a few years, where he worked as a purchasing agent for a mining firm and in the shipping department of Deseret Press. Returning to Alamo, he worked as an Engineer for the Nevada State Highway Department.

During this time he built a small trailer-park which led him to invest more of his time, money and energy in a small motel. After his first five units where paid off, he took a second risk and built on an additional ten units. He switched from being an engineer to highway maintenance so that he could work closer to home. Eventually he sold the motel and retired from the state highway. That motel continues to be a successful venture today.

Shortly after retirement, he was nearly killed in a tree trimming accident. Several months later he was once again walking and he and his sweetheart left for Ireland where they served the first of three LDS missions. His second mission was in New Zealand where he was Director of the Temple Visitor?s Center in Hamilton. A final mission was an inner-city project in Saint Louis, Mo. Clark also served on the High Council under two Stake Presidents and as a counselor for two Bishops.

His family has always been his greatest joy and his posterity has been blessed by his love. After losing his wife over four years ago, Clark had found joy in visiting his children, grandchildren, and his thirty-three great-grandchildren. He has finally joined his ?little doll? again, having passed away in Las Vegas, June 21.

Funeral services were held Saturday, June 29, 2013 at 2 p.m. at the LDS Alamo Ward Building. A viewing was held prior to services. Interment was in the Alamo Cemetery under the direction of Southern Nevada Mortuary.