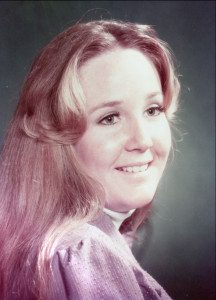 Betty Jo lived most of her life in Hiko.? She earned her Bachelor?s degree in Cedar City, Utah then moved to Houston, Texas for a brief time before returning home to Pahranagat Valley.? She worked at the Tempiute Mine outside of Rachel before marrying Jerry and raising a family. Later in life she began working again and for a short time she worked at Grover C. Dills Medical Center in Caliente, Nevada. She then worked as the Nevada Bank and Trust Branch Manager in Alamo until the branch closed.

Betty Jo loved her family and being with her grandkids, and often said that her greatest joy was her children and grandchildren.? She enjoyed being a rock-hound and hunting for arrow heads in the desert.? She also enjoyed reading, scrap-booking and was talented artist.

Funeral services will be held Monday, May 5, 20014 at 11 a.m. at the Church of Jesus Christ of Latter Day Saints, Hiko Ward Chapel, Alamo, Nevada.? Visitation will be for one hour prior at the chapel.? Interment will follow in the Alamo Cemetery.? Friends and family are invited to sign our online guest book at?www.moapavalleymortuary.com