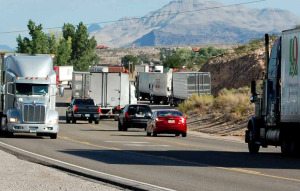 Heavy rains on Monday and flash flooding in the Moapa, Overton, Logandale area completely ripped out sections of 1-15 causing the Nevada Department of Transportation to close a large section of the freeway and reroute traffic onto U.S. Highway 93 through Lincoln County.

The flooding also caused two major power outages Monday throughout much of the south-eastern portion of the state, and a county-wide outage for Lincoln County from around 3 p.m. until 7. But that was only a preview to the problems created by the traffic tie-ups that followed the closure of the freeway along a 50-mile stretch, which local NHP officers reported started by 8 p.m. Monday.

County Sheriff Kerry Lee said, ?All communications went down temporarily. We had to get the generator started at the mountain tops,? which he completed, only to have power shut off again.

NDOT officials announced on Tuesday the damage on just a two-mile stretch of the freeway, caused by the once-in-a-century storm will take two to three days to repair, maybe longer. Several cars are still buried in the mud that washed them off the freeway after being abandoned by the drivers.

The Las Vegas Review-Journal reported what used to be the median between north and southbound lanes just north of Moapa is now a chasm that is nearly 20 feet deep in spots. ?This is something beyond our expectations,? said NDOT assistant manager Mohamed Rouas.

KLAS-TV in Las Vegas reported, ?The southbound lanes of I-15 at mile marker 92 were completely washed out. The National Weather Service referred to the flooding as ?life-threatening.? Moapa, some 50 miles north of Las Vegas, received more than three inches of rain in an hour.?

I-15 opened as far north as the Valley of Fire State Park as of Wednesday, and passenger cars can go through the park and onto state Route 169, through Overton and Logandale before rejoining the freeway. However, semi truck drivers are still required to use the U.S. 93 route.

Here in Lincoln County, all north-bound commercial trucktrailers, and many other smaller passenger vehicles and trucks are having to use the long detour onto U.S. 93 at the Love?s Truck Stop and on up through Alamo, Caliente and Panaca, then east on state Route 319, and onto Utah route 56 to Cedar City, or some on route 18 through Enterprise to St. George.

By 9 a.m. Tuesday, local Sheriff?s deputies had said the line of cars from Utah was backed up well beyond the Delmue Ranch Road. Extra help was called in from the State Parks to help direct traffic.

Then by early afternoon, southbound traffic had become so heavy reports were being received of backups on 319 all the way to Modena, and on 93 from Panaca all the way back through Caliente across Oak Springs Summit.

Some travelers were being advised in Alamo and at the Shell station in Ash Springs, to take state Route 318 up to Ely and then back on 93 to Wells and connect with 1-80 for points east and west. If already in Caliente, some were advised to just continue on 93 to Ely and then to 1-80.

In Alamo, Great Basin Foods and the Sinclair Station decided to stay open 24 hours on Tuesday to handle the traffic flow. Manager Lori Anderson said the rest of the week, they would have people on duty until about 1 a.m., then see what conditions are like.

Ash Springs R-Place Shell is always open 24/7. The Y Service at Panaca did not stay open 24 hours, but owner Steve McCrosky said the store stayed open until around 11 p.m. Gas was still available with credit cards.

Store clerk Kathy Cook opened the Y Service around 4:45 a.m. Wednesday, and the store had customers waiting she said both Tuesday and Wednesday mornings. Restroom lines had a 15 minute wait, and store workers had to wait in line just to clean them.

Although residents were worried and rumors started that some shops had ?run out of gas,? all stations were unlikely to run out, being able to call for refueling shipments when necessary. McCrosky said, ?We ran out of regular, but sold premium at regular price. We?ve never had a day like [Tuesday],? he said. Most deliveries from companies like Sysco, and Coremark, have just been late. He said, ?I wouldn?t do anything different.?

Nevada Highway Patrol Sergeant Guy Davis said cooperation between NHP, including extra troopers from Las Vegas, NDOT and the Lincoln County Sheriff?s Department, even State Park rangers, doing traffic control at the intersection of 93 and state 319 at the Y Service, and other places, had been excellent.

Sheriff Sergeant Chase Dirks said, ?We really appreciated the people of the community and Y Service, bringing us water and snacks all day. It really helped us out.?

Sheriff Lee said a large hole opened up the west side of 93, near Panaca, a rough section at milemarker 106. ?NDOT was busy with traffic control, so the County road department was filling the hole while Sheriff?s deputies were flagging traffic.?

He said Tuesday night, NDOT in Elko sent a crew down to take over handling the traffic at the Y intersection. ?Our local NDOT crews were handling a chip?and seal project on SR 375, by Rachel.? ?However, further down SR 319, sinkholes had started collapsing, due to the rain and heavy flow of traffic, which also needed repairing.

About nine accidents were reported by NHP during the day on Tuesday. Sgt. Davis said most were fender benders and there were a few minor injuries involving commercial trucks, but one injury rollover accident occurred, on the curve at the Oak Springs summit. A pickup pulling a U-Haul trailer rolled over. However the injuries were not serious and the driver refused to be transported to the hospital.

Alamo NHP officer Pat Walker, stationed at the Panaca intersection Wednesday morning ?said, ?It was a couple of Marines on reassignment to California. The trailer might have been improperly loaded. They were heading south and took a turn and crossed into oncoming traffic, rolling over on the left side of the highway.?

Wednesday morning, Davis said the traffic looked a lot better. ?We are able to man the intersection from the beginning and get it to where there is no backup and we can stay on top of it and traffic will just be able to flow.?

Tuesday night, KLAS-TV reported Governor Brian Sandoval has declared a state of emergency for Clark County and the Moapa Paiute Tribe Reservation because of the extreme flooding and dispatched a team to begin damage estimates.

The declaration qualifies local governments for state and federal funding and speeds up the state?s response to requests for help from local governments. Even before the declaration, the governor directed the State Technical Assist Response Team to assess the damage to infrastructure and work with the local community to determine property damage.

Another accident occurred early Tuesday morning, between two truckers. One was heading west in the traffic, one heading east after the traffic jam. Danny Hyden, a truck driver from Kansas, was on his way to Los Angeles in the detour when the semi came too close and took off his driver?s side mirror. He waited right outside the city limits, and said it took him half an hour to get to the ?Y? and fill out the accident report.

He said, ?We have Tim (Deputy Umina] down there citing violations.? Quite a few were administered to out-of-town drivers who were not obeying local?speed limits.

Lee said Tuesday they were expecting five more troopers to come up from Las Vegas to assist. By Wednesday morning, only two were dispatched from Las Vegas, because of another emergency.

Sergeant Dirks said most of their work, besides traffic control, was ?motor assistance. People with flat tires, ran out of gas, or over-heated on the highway. Cars are the ones we?re worried about.?

Trooper Walker also said every open spot on the side of 93 was filled with truckers sleeping Tuesday night. ?Even the old Del Pueblo building was used as a parking spot for sleeping truckers.? Some of the truckers had to stop where they were when their mandatory 11 hours were up.

No one reported disgruntled or unhappy drivers. McCrosky said a lot of passers by commented on how beautiful the Lincoln County landscape was, and that they had never thought to travel the 93 before.

The community definitely showed support for the travelers and the students that had to be transported home Tuesday afternoon. Lincoln County High School principal Mary Soderborg closed the campus for lunch, not wanting students to be on Main Street during the heavy influx of traffic. The concession stands were opened, offering students a variety of food options, and it gave the students a chance to do a little fundraising, Soderborg said.

The concessions closed around 4 p.m., but seeing the opportunity, opened again from 6 to 8 p.m. Tuesday night, offering the truck drivers food and another restroom break. Meadow Valley Middle School and LCHS sent students home an hour early. However, with cell phone communications non-existent, and the internet being backed up, contacting parents was difficult. Soderborg said, ?We will do everything we can to keep your children safe.?

With the rumors of gas depleting, Soderborg said they went ahead and canceled the football, volleyball and cross country practices. They contacted the Kanab, Utah team, who were scheduled to come play the Lincoln JVs on Thursday, although it wasn?t certain at print time if the team might not try to make the journey anyway.

Pahranagat Valley cancelled their volleyball game at The Meadows on Tuesday. School District Superintendent Steve Hansen said principal Mike Strong did not want the bus on the road with all the heavy traffic. No date has been given yet for a makeup.

Soderborg said Lincoln High had to reschedule the visit of the Josten?s school ring crew, and the Back to School night. Plans now are to have the event Tuesday, Sept. 16 at 6 p.m.

On Wednesday, Soderborg said, with the internet down, and having to use phone tree lines, ?Sometimes the old way works,? and that he might implement some of the emergency strategies used from the ?80s. ?I don?t think we?re done yet.? He encouraged parents to call the school to get a message to their child, rather than call the student, if an emergency situation like this happens, and encouraged parents to talk with their children to make their own emergency plan.

County Emergency Management Coordinator Rick Stever said, ?We tentatively have an emergency plan in place with the state, but most of the public doesn?t know about it.

September is actually the National Emergency Preparedness month, and this week?s events certainly put into motion such concerns for being ready. Stever said an emergency checklist can be found on www.fema.gov, for those who want to be better prepared. But he stressed the importance of having a plan in place, being prepared with supplies for a few days, and stressed having enough medication for those who take prescriptions. Another big factor was the elderly and seniors who might live alone. He encouraged having a plan within the family of what to do should terror strike, and to coordinate with the Emergency Committee on what your elderly relative might need assistance with.

Overall, however, Stever said, ?I think the residents handled it very well.?

Superintendent Hansen said they used teachers and Search and Rescue team volunteers to help at the highway cross-walks in Panaca and along the bike path at the Y station. ?It was just bumper to bumper. We originally called the Sheriff, but they were so busy, we turned to Search and Rescue and other volunteers. Caliente and Panaca are really only the two communities where the road goes through the middle of town.?

By Wednesday, although still heavy, traffic was much more manageable.