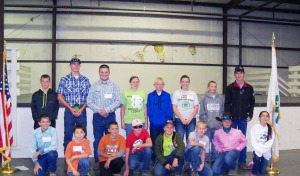 Douglas County hosted the 2014 Nevada 4-H Shooting Sports State Competition, last Saturday, Sept. 13, where Lincoln County youth received countless blue ribbons and medals. 16 youth out of the 22 youth in the county that qualified made the eight-hour journey. ?And they were so gracious,? said Community Base Instructor for University of Nevada Cooperative Extension Hayley Gloeckner, who organizes the 4-H group. Gloeckner said all the youth had one common goal: to bring home the gold. Connor Carter and Aya Rowe achieved that goal. Connor claimed gold for the air rifle unlimited and Aya for 22 rifle limited and air rifle unlimited.

Silver medals were brought home by Hunter Hollingshead for the shotgun, and Seth Patrick in both shotgun and archery freestyle unlimited. Seth also took home a bronze for 22 rifle limited.

With a generous $25,000 grant awarded from the National Rifle Association last year, the participating county youth have spent, ?countless hours of their free time,? Gloeckner said, practicing, learning the different disciplines, such as archery and muzzleloading, as well as learning range commands and safety. Depending on the community the children participated in, 4-H?ers met once or twice a week. The local 4-H organization was so successful, they are reapplying for the grant this fall. ?They?ve [NRA] been very supportive,? Gloeckner said.

For the shooting season, from April through August, the county holds four fun meets, where youth earn points to qualify for the state competition. In addition to the fun meets, each community organizes fundraising, raffles prizes and raises awareness and support for the sports shooting 4-H offers.

In Alamo, leaders Steve Meldrum, David Highbe and Varlin Higbee ran a shotgun competition. In Panaca, Grant and Jamie Perkins along with Orrin and Dawn Dotson organized a shoot competition. In Pioche, Glenn Zelch and Pete Gill ran another shoot competition. Caliente leaders Steve Rowe and Melissa Mizer hosted a Dutch-oven dinner, with the incredible support of the Caliente Volunteer Fire Department over the summer. All the youth in the program participate in a ?Beauty and the Beast? raffle, where ticket winners either receive a gun or a facial as a prize. This year?s winners were Bob Claybaugh, who received a 22 rifle, Gordon Wadsworth, who received a 50 cal muzzle loader, and Bob Steele, who received the facial. Gloeckner said, ?the community was very supportive.?

The competing youth were Janel and William Meldrum, Roger Wilson, Madison Decker, Trevin and Bryson Perkins, Jackson Dojaquez, Raymond and Tyler Thompson, Aya Rowe, Nicole and William Gutierrez, Connor Carter, Seth Patrick and Channer and Hunter Hollingshead. ?I?m so lucky to have this group,? said Gloeckner. She said a great time was had by all.

The group is planning their annual 4-H Barbecue and Awards ceremony at the end of this month, Sept. 27 at 3 p.m. at the Kershaw Ryan State Park. Based on points for meetings attended, projects, volunteerism and community service, the county?s Top 4-H?er will be revealed, as well as top exhibitor, and other awards in the junior, senior and intermediate categories.

Gloeckner said, ?This County is blessed with a great group of 4-H leaders that dedicate untold hours to bring the fun of 4-H Shooting Sports to our youth, under a safe and happy environment. We would like to congratulate all of the 4-H State Shooting Sports winners.?