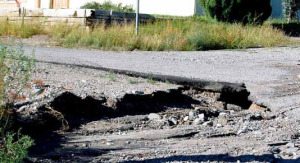 A potent fall storm that initially slammed into the Northwest earlier in the week, sliced its way through the Southwest Friday afternoon and evening last week.

A fresh round of flooding rain and severe weather was unleashed in much of Arizona, eastern Nevada and southern Utah as the storm moved through the area.

Several local football games were delayed up to an hour by the lightning and hard, heavy downpours.

The Nevada Department of Transportation reported that State Route 168 was closed on Friday before being reopened later Saturday in both directions for a 13-mile stretch between Glendale and Coyote Springs. Water and debris were on the interstate, the agency said.

In Alamo, rushing waters on Friday eroded gashes through roads and covered them with rocks and debris, while heavy erosion was found near the high school softball and baseball fields with the baseball field in particular being flooded. One person said they thought the rains were the heaviest noted in the valley for one day since 1983.

The County roads were not damaged much by the erosion from the downpour. Robert Steele of the Alamo division of NDOT said there was ?some water over the roadway in different spots, but we were able to handle it pretty good. There was some flooding out in Six-Mile, he said. ?Nothing major, the crew was able to take care of it. There was a little bit of water south of Alamo and some came over highway 93 across from the Sinclair Station and Great Basin Foods.? Some flooding did occur at Eagle Valley but Brad Lloyd?s crew was able to take care of the debris that was on the roadway.

Some homes in the County did report flooding of basements or low lying rooms where water rushed in from nearby higher elevations.

Adults may have not liked the rain so much, but some kids, probably in all parts of the County, found the rising waters delightful to play in. In a dip in the road in front of the Pahranagat Valley Middle School, three grade school boys were seen literally swimming in the rushing muddy water. Wet from head to toe, both sides, and loving it.