Pahranagat Valley girls basketball has dominated the Southern Division IV league in recent years. Since 2007, the Lady Panthers have an unofficial league record of 61-3. Unofficial because scores of four league games in 2011 were not reported.

Sophomore Kalli Hosier led the way for the PVHS girls with 23 points, 16 in the first half. Jamie Hansen contributed 15 points.

Round Mountain?s up and coming freshman star Alyssa Hanks was held to only 14 points for the Knights, and 10 of those came at the free throw line. Mariah Mayfield added 13 points, and Latesha Marcure had 11.

On Saturday, Hosier again led the Lady Panthers by scoring 16 of her 20 points in the second half, and the Panthers used a 34-8 third-quarter run to pull away from the Hornets for a 56-23 win. The 34 points may be a girls school record for most scored in one quarter.

Jamie Hansen added seven points for Pahranagat Valley, which led 14-12 at the half.

Now all the Alamo girls need to do to put icing on the cake and win their sixth consecutive regular season title is win at Sandy Valley this Friday.

The Southern Division IV playoffs begin Feb. 18. The top two seeds, likely Pahranagat and Round Mountain, have a bye, while the No. 4 seed hosts the No. 5 seed, and No. 3 hosts No. 6. Tournament semi-finals will be at Chaparral High in Las Vegas Feb. 20 and the finals at Spring Valley High Feb. 21.
The top two advance to state at the Orleans Arena in Las Vegas Feb. 27-28.

McDermitt, a team with no seniors, is on a 10-game win streak and considered the favorite going into their league tournament averaging 63 points per game. And they do have a pre-season 68-38 win over defending state champion Pahranagat Valley in mid-December. 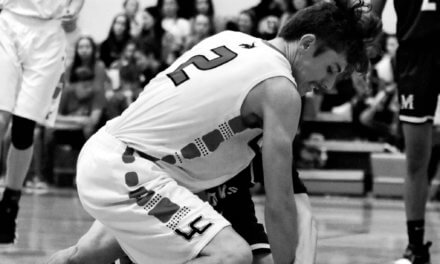