You are here: Home / Sports / Sweet Repeat: Lincoln girls back to back champs 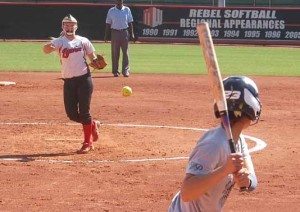 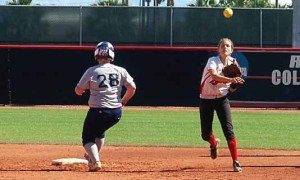 Would history reverse itself? A question no doubt on the on the minds of many in the Division III state softball championship at UNLV?s Eller Media Stadium May 16.

Both teams had advanced to the finals again and the stage was set for a reversal of fortunes. Now the shoe was on unbeaten Lincoln.

The Lady Bobcats made it work in the first game too, with a nice six hit, five-run fifth inning including Ashlyn Huntington?s three-run triple to right center, to overcome at 2-0 deficit for a 5-2 win and force a winner-take-all deciding game, just like last year.

Lincoln coach Pat Kelley regrouped his team between games and reminded them of all the hard work on cold and windy days they had put in. ?They had put in too much work to just die. We just had to come out and play our game,? he said.

Easton Tingey had an RBI single in the first inning of the second game, and Abby Schimbeck and Alisha Rowe each drove in a run in the second inning as the Lynx (26-8) built a quick 4-0 lead.

?That was really important,? said Kelley. ?It kind of set them back a little bit, and it got us going again.?

White Pine (18-9) put together three hits and a walk in the third inning to cut Lincoln?s lead to only 4-2. Then Kelley called in Aspen Wilkin, the only senior, to shut the door.

Wilkin, who had tossed a six-hitter but took the loss in the first game, worked out of a bases-loaded jam in the third. She allowed just one unearned run on three hits in the final 4-2/3 innings

?She has done that for us all year long,? said Kelley. ?Last year at state, she did the same thing for us.?

Lincoln added four insurance runs in the fifth inning to secure an 8-3 win.

The 72-year old Kelley, who won a second consecutive softball title said, ?The second title is harder than the first one. They can say what they want, but it?s awesome. These kids deserve it.?

On Thursday, the first day of the tournament, Wilkin just missed a perfect game for the Lynx. She had a five-inning no-hitter with 10 strikeouts for a 13-0 win over Battle Mountain at The Meadows.

?Aspen pitched a tremendous game,? Kelley said. ?She is our only senior and she is our leader. We go as she goes.?

After getting the first 10 batters out, an error in the fourth inning broke up Wilkin?s perfect-game bid, the only base runner of the day for Battle Mountain.
At the plate, Wilkin finished 2-for-2 with a home run and two RBIs for Lincoln County. The Lynx provided plenty of offense, as they exploded for four runs in the bottom of the first inning and never let up.

Alisha Rowe started off the fourth inning with a single, followed by a single by Kia Phillips. Easton Tingey singled to drive in Rowe, and Wilkin followed with an RBI single. Chesnee Harding capped the inning with a two-run homer.

Harding finished 2-for-3 with a double, a home run and two RBIs, and Cameron Lloyd added a three-run homer for the Lynx, who also got a home run from Josie Burgess and a double from Hannah Lytle.

On Friday, in the winner?s bracket semifinal, with Wilkin again on the mound, she scattered five hits and fanned nine in a complete-game shutout to power the Lynx by the Yerington Lions 7-0.

Wilkin also provided the game?s first run, as her sacrifice fly scored Aya Rowe in the top of the third inning.

Chesnee Harding was 1-for-4 with two RBIs, and Easton Tingey went 1-for-3 with a solo home run for Lincoln County.

Tawanee Ackley finished 2-for-3 with a double for Yerington.