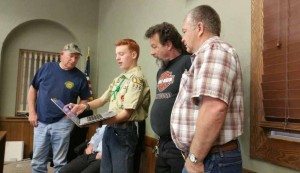 Eagle Scout candidate Carlin Christensen of Caliente came up with a unique idea for his Eagle Scout Award project.

Christensen, who will be a sophomore at Lincoln County High School this fall, said his project was photographing the graves in three of the four cemeteries in Caliente – the new city cemetery, the Odd Fellows Cemetery and the Conoway Veterans Memorial Cemetery. ?I got a team together and we photographed all the headstones in the cemeteries using our iPhones,? Christensen said. ?Whenever you take a picture on those, it also embeds the GPS coordinates into the picture. So, everyone turned on that feature on their Iphones as we did the work.?

Christensen added, ?There is an online site, called FindAGrave.com, a non-profit organization that has the goal getting every cemetery in the world on their website. Then, I collected all the pictures with GPS coordinates, put them into folders, mailed the folders to those who had helped me with the project, other students and adults and they could then download it when they wanted to find a grave.?

He also sent the information to FindAGrave.com, and it can be displayed there. ?My grandparents in Fielding, Utah got me interested in doing this because of their own work on family history research,? he said.

Christensen was given a Certificate of Appreciation from the Caliente City Council in April for his work. ?I put all the information on a spreadsheet and put those onto discs and gave it to City Hall,? he said. ?Now they have a more complete record of who?s all buried in their cemeteries.?

He did not try to record graves in the old city cemetery. ?Many of those are pretty beat up anymore and there are a number of unmarked graves as well.?

Christensen said he enjoyed the project because he found it gave him his first experience of being in a leadership role to accomplish a given task. ?It was stressful, but fun at the same time.?

His scoutmaster has submitted the project to the Boy Scouts of America for consideration as the National Eagle Scout Project of the Year Award.

Christensen said a person from Utah, who saw the information on FindAGrave.com, even came to Caliente to look for the grave of one of her relatives. ?They found the website and wanted to come here and see the actual headstone. It?s nice to know I?m helping other people to find their ancestors they have not been able to find before.?

He hopes his project idea will be picked up by other Scouts who may want to do a similar project in Alamo, Panaca or Pioche.