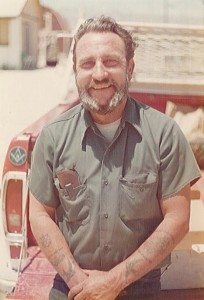 Bud was born Jan. 10, 1927 in Bailey County, Texas near the small town of Muleshoe. His parents were Ira Charlton and Alice (Edmonston) Charlton who were on their way to Oklahoma in 1927, but didn?t quite make it before Bud decided to make his entrance into this world. Bud always joked that he was almost an Okie.

Bud grew up living mostly in Oklahoma, Texas, and New Mexico. His parents split when he was a young child. His older brother Ed stayed with their father and Bud moved on with his mother. His mother later remarried and added his baby sister Jo Ann to the family dynamic. In 1941 the family made a move to drier climate due to his step-father?s tuberculosis. Bud was only 14 when his step-father Ralph passed away, which left him faced with the responsibility to help provide for his baby sister. With his mother?s help, Bud applied for a social security card claiming he was 16 years old so he could legally work. This two year age discrepancy carried with him the rest of his life. He worked for the Arizona Highway Department until his mother remarried. After which, Bud enlisting in the United States Navy. This was during the latter part of WWII and Bud was only 17. After the war, in 1946, Bud left the Navy and moved north with a friend. It was in Greybull, Wyoming where he met and later married the love of his life, Dorothy Ernst on Sept. 6, 1947. Shortly before they married Bud had to confess that he was actually two years younger and joked that Dorothy would be robbing the cradle. This was funny to him, but not so much to Dorothy.

Bud and Dorothy had three children together and traveled around the western United States, moving to wherever the work would lead them, from Billings, Montana to Phoenix, Arizona and many places in-between. They resided in several places within Nevada before Bud?s friend Jim Tennille said ?what about Caliente??. Having never been to Caliente before, Bud and Dorothy packed up their family and permanently made Caliente home. As they were packing, Bud recalled Dorothy saying ?if this Caliente place is anything like Tonopah we?re getting a divorce!?. Caliente was a nice little town, all three kids attended Lincoln County High School, but work was scarce most of the time. Bud had to take work in Alaska on the Alaska Pipeline for several years before moving back to work for the Nevada Test Site. Bud retired from the Nevada Test Site in 1987. During his retirement he was active in the community. He was a Mason (Caliente Lodge #38) and Zelzah Shriner. He participated in nearly all of the parades. He also served on the city council, and was an activist against the water grab.

Services will be held on Saturday, Nov. 21, 2015 where he will be laid to rest at the Conaway Veteran?s Cemetery in Caliente.

Funeral services for Erma Campbell will be held on Saturday, Nov. 7 at the Pioche Ward Chapel at 11 a.m. (PT). She passed away peacefully on Monday, Nov. 2 in her home in St George. (She was a resident of Pioche for over 70 years.)

We appreciate all the friends and family in Lincoln County that have been so kind to visit her. We know she was very proud to be considered from Pioche and Lincoln County.