You are here: Home / Obituaries / A. ?Rae? Tennille Smalley 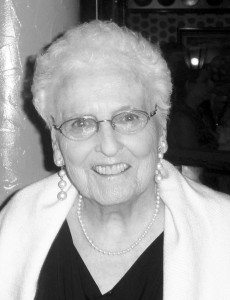 Alice ?Rae? Tennille was born on July 19, 1924 to Buck and Alice Tennille of Caliente, Nevada. The Tennilles were a ranching family and Rae was raised in the beautiful Rainbow Canyon south of town. She attended Lincoln County High School graduating in 1942.

At the age of 18, during WWII, Rae left Caliente by train to Colorado, where she entered the University of Colorado?s cadet nurse program. During her time in Colorado, she met Jim Smalley of The United States Army Air Corps. They communicated throughout Jim?s service in Europe during the war and upon Jim?s discharge from the service they married in Peebles, Ohio. Although Jim relocated to Ohio, Rae was able to complete her studies at the University of Colorado, obtaining her Bachelor of Science degree in nursing in 1947. Upon completion of her degree, Rae joined Jim who was attending Ohio State University. She worked as a nurse in various Ohio medical facilities while Jim completed his degrees in Education.

In 1949 the Smalleys relocated to Las Vegas and then Henderson when Jim obtained employment with our local school district. During the fifties, Rae worked at Southern Nevada Memorial Hospital and St. Rose De Lima. In the early sixties, Rae gained employment with the Clark County School District as a school nurse. At this time she often was assigned to five schools and helped defined the role of school nurse for the school district. In the mid-seventies, Rae was reassigned to Henderson where at one time she was the only school nurse for every Henderson school. Rae continued her career in Henderson. When she retired in 1987 she was serving as school nurse at Faye Galloway, Gordon McCaw, and CT Sewell elementary schools.

In addition to becoming a mother during the baby boom, Rae pursued her nursing career, served her community as an advocate for children?s health programs, and as an active member of American Association of University Women. She helped establish Henderson?s first preschool program, served on the Nevada State Welfare Board, was active in state politics. During her retirement she served as President of the Parkinson?s Disease Support Group.

Both Jim and Rae Smalley have been honored as Distinguished Nevadans by the Board of Regents and by the Clark County School District by means of having a school in Henderson named for them.

Rae was preceded in death by her husband Jim and her daughter Alicia, and brother James B. Tennille, Jr. She is survived by her, son James E. ?Ed? Smalley Jr., daughter Esther Cothrun, both of Henderson, brother Wayne Tennille of San Dimas, CA, as well as seven grandchildren, and ten great grandchildren.

A Celebration of Life Event will take place on Feb 27, 2016 at 3 p.m. in the Chapel at Palm Mortuary, 800 South Boulder Highway, Henderson. In lieu of flowers, donations can be made to the Alicia L. Smalley Memorial Scholarship Endowment for Social Justice: UNR Foundation, Mail Stop 0162, Reno, NV 89557-0007. To donate on line: http//giving.unr.edu// Select other and enter Alicia L. Smalley (175463).

Graveside services will take place at the Caliente IOOF cemetery during the Memorial Day weekend.