You are here: Home / Uncategorized / Building the Railroad Through the Rainbow Canyon 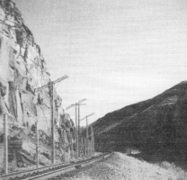 The railroad through Meadow Valley Wash was completed in 1904 as the San Pedro, Los Angeles and Salt Lake (SPLA&SL), but the story of the railroad begins much earlier than that.

Author Walter Averett in his book Through the Rainbow Canyon, notes that as early as 1889, Union Pacific had a line from Salt Lake to Milford, Utah, and a subsidiary line, the Oregon Short Line, came to Uvada, on the border between Nevada and Utah, then on down Cherry Creek in 1901 to the Culverwell Ranch, which later became the City of Caliente.

A number of disputes, both legal and illegal, took place regarding the railroad companies, but that is not the focus of this article.

Averett notes that the line from Uvada to Caliente was finished in 1901, to a spot a couple miles west of Boyd in 1903, through the Meadow Valley Wash in 1904, and the final spike of the entire railroad driven in 1905 some distance south of Las Vegas.

The first train to arrive in Caliente, Averett writes, was a work train of the SPLA&SL bringing in supplies.
However, because of lingering disputes and controversy, ?the train was met by a group of angry, armed workers of the Oregon Short Line, and the SPLA&SL workers got off, and went running up the hill to get away.?

The conflict between the two railroad companies was settled in 1903, and eventually became fully owned by Union Pacific, as it is today.

For about a year, work on the line through Rainbow Canyon continued with a camp, store, hotel at Pockets, about five miles below Carp.

Caliente served as a supply center for the workers. There was a water tank, ties, rails and bridge timbers were also stored there.

The little siding of Pockets was where the mail bags were exchanged by mail riders from Panaca and the Muddy. Averett writes, ?The riders would meet there, stay overnight, and return. They made three trips a week.?

Other construction camps were located along the route. By September, 1903, some 800 men were at work, with the numbers eventually swelling to 1,500.

Through the narrowest parts of Rainbow Canyon, the railroad was built so close to the hills that rocks were certain to fall on the tracks. Rock fences ?on tall poles with heavy wire netting between the tracks and the cliffs were built to catch rocks that are dislodged from behind the fence.? Signal wires ran through the fence, so that if a rock large enough did break through, red signal lights at various points were switched on automatically to stop traffic going in either direction.

By May, 1904, according to Averett, construction trains were carrying both passengers and freight between Caliente and Moapa. ?The train left Caliente every night, arrived at Moapa by midnight, and was back in Caliente by 4 a.m. the next morning.? The April 25, 1905 issue of the Lincoln County Record reported the passenger train made the 136-mile run from Caliente to Las Vegas in two hours and 20 minutes.

In late summer, 1904, some $200,000 was appropriated for building ?permanent structures? in Caliente. This was to include 12 homes, the beginnings of Company Row, a round house, a fine station building, a water tank, an oil house, and an artificial ice house. Averett notes that Company Row was doubled in size to include 24 homes. On June 9, the newspaper reported the roundhouse was to be expanded from 18 stalls to 34 and a 200-ton coal chute had been built, large enough to handle 10 engines at once.

Through both World Wars, prohibition, the Great Depression and much more, Caliente was the division point on the UPRR line, seeing many passenger and troop trains pass, and serving as a maintenance facility and a base for helper locomotives. By the 1950s, as diesel locomotives replaced steam, UPRR no longer needed to use the Caliente site, and had already moved the maintenance hub to Las Vegas in 1948.

Passenger service continued on the line between Los Angeles and Chicago until the mid-1970s. Today, only freight trains run on the line, the glory days are long past and the memories fading of the very few still living who even have second-hand stories of the building of the railroad Through the Rainbow Canyon.