You are here: Home / Sports / Lincoln wrestlers do well at state

It was, as described by wrestler Ben Culverwell, an ?amazing way to end the season.? 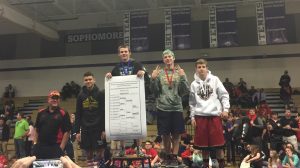 The culmination of the wrestlers? effort and training was a satisfactory one, with Zach Rowe placing first in the championship?s weight division, making him a second consecutive state champion. This is Rowe?s fourth time competing in state, and as a captain of the team and leaving senior, he was ?expected to win it.? Rowe?s quick moves qualified him for the finals, where he wrestled Matt Rochester of Battle Mountain High School for first place. It was an intense match, with the first period ending with Rowe losing 0-6. However, he made an amazing comeback in the second and third period, winning with a score of 14-6. 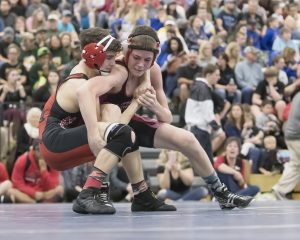 Likewise, senior wrestler and team captain Mathews competed in the championship, placing third in the 138 pounds weight division. This is Mathews fourth year in a row qualifying for state finals, however he was unable to attend to last year?s because of injuries. He had a great performance, winning four out of five matches and representing Lincoln County?s sportsmanship at its finest.

Culverwell also wrestled in the championship?s finals, after winning all of his matches with strategic techniques and quick pins. The outcome of his suspenseful last match placed him in second place, after wrestling Yerington High School. Culverwell is a returning state champion, who remarked that ?this wrestling season has been great and Zack and Derek’s wins making it a great way to end it.?

Freshman Trevin Perkins was also a Lincoln County wrestler who placed fourth in the state championship?s 116 pounds weight division, winning three out of five matches. Perkins commented on the great performance the boys had throughout the season, mentioning captains Mathews and Rowe and coaches Borne and Culverwell as the main reason for their success.

Sophomore wrestler Kyle Zierow and freshman Chance Christensen have had an amazing season that allowed them to qualify for state in Reno, however failed to receive a title in their weight divisions. It’s worth remarking Zierow and Christensen?s very successful participation, because they’ve been working towards ?improving and making it to state, and getting to wrestle and see [the Lincoln County wrestling] team at the top of their game is a great moment.?