You are here: Home / Sports / Lynx hold off Needles to repeat as state champions 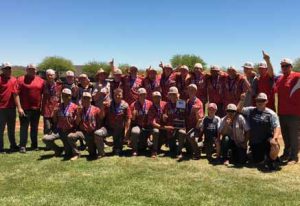 Lincoln County baseball coach Raymond Wadsworth had said at the beginning of the season the team goal was to repeat as state champions.

Knowing how tough it was last year, as the team had to beat a talented Yerington team twice to win the title, the goal to repeat put some added pressure on the players and coaches.

So when the Lynx, behind workhorse pitchers Hunter Wilkin, Kobe Walker, Kevin Mathews and other team leaders, defeated Needles last weekend to win their second 2A state championship in as many years, the first feeling was ?relief,? Wadsworth said.

?It was an expectation for us. We set a goal. That was a little pressure we put on ourselves.?

?It was just pure joy,? he added. ?Really surreal. The team earned this. It was just fantastic. The kids were all excited. Parents were ecstatic and happy for the team.?

The Lynx had already faced Needles four times over the course of the season, beating the Mustangs every time.

But that?s just what the Lynx did, defeating a Needles group that fought and clawed its way through the elimination bracket for another shot at Lincoln.

?They were ready and eager to play us,? Wadsworth said.

But Lincoln had a plan in mind. Mathews would start the game. Knowing that the Mustangs would have to win twice to take the championship, the goal was to get to the late innings and then let Wilkin take the mound in relief and finish the job.

?We executed it,? Wadsworth said. ?Couldn?t have done any better.? The Lynx were in control throughout for a 6-2 final, earning back-to-back state titles for the first time in 24 years.

Because of pitch count rules, Wilkin had just 36 pitches left on the weekend to work with. He faced 11 batters, allowed one hit, struck out one and walked one. With two outs and a 6-2 lead, he gave way to Alex Vincent who struck out Reid Shaver to end the game.

?It was kind of like a chess game,? Wadsworth said. ?You have to put the pieces at the right spot at the right time to do what we needed to do.?

The coach added, ?I felt for the most part we controlled the game. We knew that they could hit the ball. Just going into that game, we just had a lot of confidence, because the way we played them before.?

The Lynx encore to their 2016 championship season was something special. The team dominated the 2A, going undefeated in league play and finishing 25-3 overall.

?We work hard – work on specific things,? he said. ?You are expected to do it well, or to do it until you can do it well.?

The team was welcomed by a caravan and community members lining the streets as the team bus travelled through Caliente, Panaca and Pioche.

Lincoln closed out the season on a 10-game win streak. In the state final, the Lynx scored quickly against Needles. McKinley O?Connor?s single brought home Kobe Walker with two outs to get the Lynx on the board first.

The boys pushed the lead to 4-0 in the third with hits from Walker and Kamdon Lewis, but also took advantage of three Needles throwing errors. Vincent, Walker and Lewis scored the Lynx runs.

Needles? (19-11) only runs of the game came in the fourth inning. But Lincoln County answered in its half of the fourth, putting up two runs of its own. Vincent?s RBI single coupled with two more Mustang errors pushed the Lynx lead to 6-2.

All 13 hits in the game were singles. Walker had two hits to lead the Lynx while Yeager was 2-for-3 for the Mustangs.

To start the tournament, Lincoln slipped past West Wendover 5-2 on Thursday, and ripped Yerington 16-8 on Friday. Needles then edged Yerington 7-6 in an elimination game to make it to the finals.

Wadsworth said he will enjoy the victory for a few weeks and then start focusing on football season. He is starting his first year as head football coach.

However, he added baseball is never completely out of the picture, and those coming back for next year will put in some offseason work.

?I?m always in the back of my mind thinking about next year.?

Dave Maxwell contributed to this story.