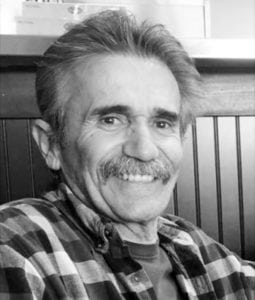 Albert Anthony Bozzelli passed away peacefully on June 5, 2018 after a sudden illness. He was born Feb. 5, 1950, to Albert and Jean Bozzelli, in Philadelphia, Pennsylvania. He moved out West in the 70?s to Las Vegas, Nevada where he loved to play poker as much as he loved to deal it. He found his ultimate calling with the Painter?s Union; next time you look up at the Caesar?s Palace and see the painted sky on the ceiling you can smile and think of Al. He left beautiful marks all over the Las Vegas Strip during his time as a painter. In 1988 he married Deborah, and they had two sons, Michael and Dominic. In 1997, the family moved to Eureka, Nevada, where Albert worked on the restoration of the old courthouse and opera house, in addition to grabbing a slice of the country life. He enjoyed having horses again. After his retirement the family moved to Caliente, Nevada, where he spent his days with his sons and wife, and working tirelessly on his home. There was no project he couldn?t tackle beautifully. They moved to Cedar City, UT in 2015, where he enjoyed restoring antique telephones, gardening, woodworking, and socializing with his neighbors. He was so proud to see his son graduate from SUU a week before his sudden illness. Despite his best efforts (if you knew Albert you know he hated doctors and hospitals) this was one battle he couldn?t overcome.

He is preceded in death by his father, mother, and baby sister Joan. He is survived by his loving wife of 30 years Debbie, his sons Michael and Dominic, his daughter Melissa, and countless family and friends.

Graveside services will be held Saturday June 16 at the Cedar City Cemetery, with a celebration of life to follow. Please contact the family for details at dab@infowest.com

Al was full of life, a generous, loving human, and anyone who knew him is better for it. We will miss him dearly.