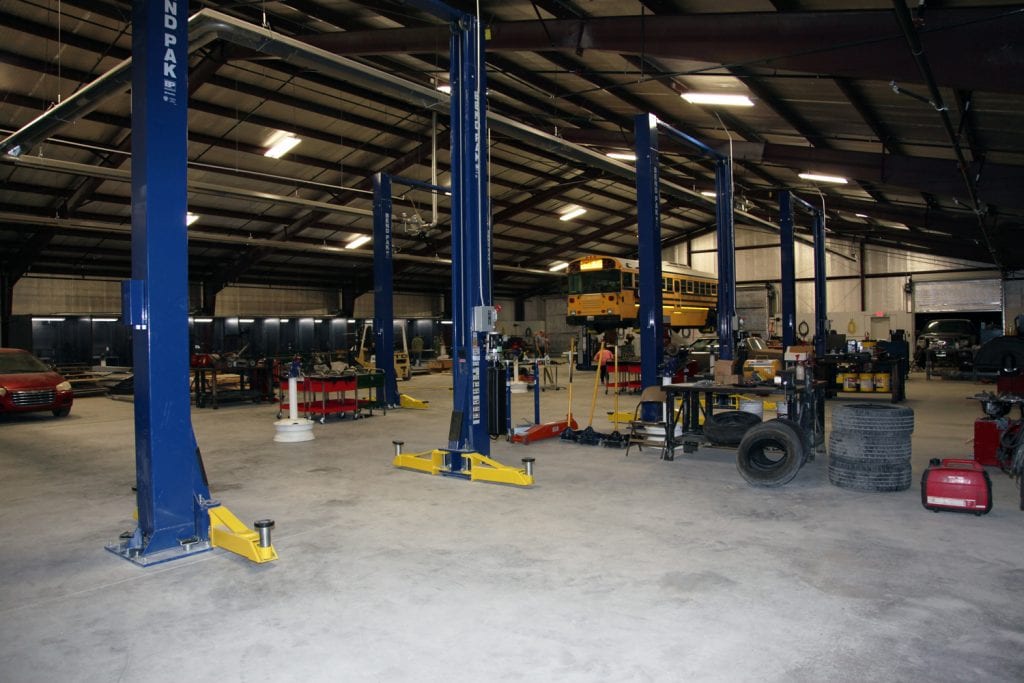 The inside of the building was gutted by the blaze. The teacher, Rob Hansen, received burns to his hands, but fortunately nobody was seriously injured. The school closed the shop down and Hansen taught solely in a classroom until the shop and construction classes could start working on building a new facility as part of their curriculum.

A lot of people contributed to make it happen. The process started out with former Superintendent Steve Hansen, who bought a metal building in 2016 through capital improvement and insurance money totaling approximately $90,000. Doing a metal building allowed for a significantly bigger shop. The school broke ground in July 2016.

The PVHS shop students, under Rob Hansen?s guidance, worked on constructing the classroom, restrooms, hallway, utility room, storage room, and all of the interior walls. They installed plywood sheeting throughout the framed walls, primed and painted the walls, installed compressed air black pipe and auto lifts, and designed and constructed the welding booths and vent systems along with the dust collection system in the construction lab.

Rob Hansen expressed, ?It would?ve been nice to have the resources to just hire someone to get construction done, but the reality was that the district didn?t have the additional resources to help in covering those costs, so if I wanted a new building, the students and I were going to have to work and put in sweat equity. I was nervous and uncomfortable of the responsibility, but the experience, even though difficult, was a great way to learn for the students and I.?

The school received around $180,000 from the State Career and Technical Education (CTE) grant that helped in equipping the shop. The new shop will teach automotive, construction, wood shop, and welding.

Hansen continued, ?Students will learn how to build a house. Not everyone is going to build a house, but everyone is going to own one, and with the square footage available, we can have more students with bigger projects. With welding, it is a good skill to know since there are a shortage of truck workers, welders, and auto mechanics. There are a lot of opportunities out there if that is their chosen career to make a living. I am glad to have the facility for students to learn the basics and pursue more afterward. The students wouldn?t have that without this facility. This helps them in their life/career decisions.?

Strong added, ?It?s a beautiful facility that will be very effective in running our CTE programs and growing them. It also provides a real service in the community with Panther Automotive. That gives kids the opportunity to work on cars, and the kids who are qualified get to work on them.?

Also introduced at the open house was a new alumni lounge, made possible by a private donation of $10,000. The room is a renovation of the library, which started back in May 2018 and was completed in September.

The person who donated the funds wanted to see all of the state academic achievements and trophies displayed properly. This new room allows alumni to come back and have a place to see the history of the school. Brooke Foremaster and Taunya Mortensen were the interior decorators. Sue Higbee painted the whole room. Strong Tile donated all labor for tiling the space, and Ken Back and Ryan Rhodes also helped in creating the space.

Strong related, ?Hopefully it?ll be a place alumni can come and learn more about the history of the school and this facility will be a place for students to study, grow, and learn as well as be an effective meeting room at the same time.?

Strong started the open house night announcing that PVHS had won the Nevada Interscholastic Activities Association (NIAA) Award of Excellence. According to the NIAA?s website, ?the scoring system awards points to member schools based on their varsity teams? performances in the classrooms, at the sports venues and in the Citizenship Through Sports initiative. Each of the three major categories in high school activities ? academics, athletics, and sportsmanship ? are weighted equally, and boys and girls? programs are combined in the standings table. Spirit and student council/leadership points were added after the conclusion of the winter season.?

Strong also informed those present that PVHS is a four-star school and the middle school is a three-star school. Strong also discussed sportsmanship and the Summit Learning Program.