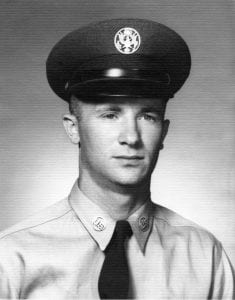 Gordon Frederick Yach, 80, of both Eagle Valley and Las Vegas, passed away September 26, 2018. He was born August 28, 1938 to C. E. ?Doc? and Elizabeth ?Lily? Sherbert Yach in Stevens Point, WI. Gordon served in the U.S. Air Force and attended the University of Wisconsin. He served 26 years as a LVMPD police officer – retiring as the Director of Detention Services, continuing to privately consult across the country on large detention facility design and management after he retired.

Gordon enjoyed among other things; music, playing his guitar (self-taught), riding and raising horses (Arabians), telling stories about old Las Vegas to friends & family (which led to authoring a book), sitting on the front porch (Eagle Valley), grabbing coffee with friends, and of course, keeping up with his Green Bay Packers every year! While he was a 60 year resident of Las Vegas, Gordon and his wife Joyce (nee Sullivan, raised in Lincoln County) became property owners in Lincoln County in the early 70?s. It became a regular weekend and vacation destination for their large family (and many horses), eventually retiring to Eagle Valley in the late 90?s.

Gordon was preceded in death by son Mitchell, brother David, and both parents. He is survived by his wife Joyce, sister Suzanne Kalepp (WI), and 4 of 5 children, sons: Mark Yach (of Eagle Valley), Rick (Teri) Yach, Dr. Christopher (Terri Fujikawa) Yach, and daughter Tisha De Leon – all of Las Vegas. Seven grandchildren: Cole, Chandler, Sofia, Ryann, Dino, Dylan, & Seth; two great-grandchildren Silver & Link, all of Las Vegas. Gordon, with his sense of humor, will be deeply missed. A celebration of life will be held on Saturday, Oct. 13 in Las Vegas at 2 p.m. (702-378-2121 for details), and a private burial will be handled through St Joseph?s Cemetery in Pioche, NV later in the month.