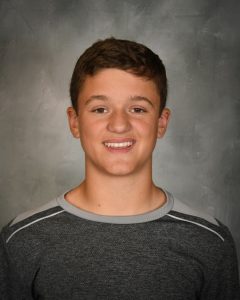 Colby Kent Bowman was born October 21, 2004, in Las Vegas, Nevada. The beautiful firstborn of Katie Bowman, and big brother to Layla Lyn, he brought so much joy to his family as a sweet, loud baby boy.

Colby lived with his mother and grandparents at their family home in Las Vegas. He started his adventures early in life with his first trip to the family beach house when he was just one month old. He loved those regular trips, especially all the time spent fishing with his papa and uncles from the shore and in the deeper water from his sea kayak. His Grammy bought him a paddleboard that he loved to paddle around on with his little sister, Layla.

Colby and his cousin Lorelei were like brother and sister. They spent their early childhood as constant companions at Nonnie and Papa?s house, swimming in the backyard pool and playing ?baseball? in the house.

From the time he started speaking, everyone could see that Colby was one smart kid. He had the ability to memorize anything, including songs and dozens of family members? ages, which he would proudly recite to anyone who would ask.

His favorite song was ?God Bless America.? He was patriotic from a very young age and talked about joining the military someday. Colby would recite the Pledge of Allegiance to a little flag that he kept hanging in his room.

He was always curious and full of questions about anything that popped into his head. Drives in the car were always interesting because he liked to blow duck calls, sing at the top of his lungs, and loved to make crazy funny faces at the people in other cars.

Colby was learning to drive with his papa out in the hills of Lincoln County. He drove the Ranger every chance he could and loved to show family his secret spots.

Colby had many pets, including a stray cat named Bob that he loved. Grammy bought him his first puppy, Ivy, four years ago. He loved to teach her tricks and wrestle until covered in her hair.

At three, Colby started preschool with Miss Janis at Tot Spot. He eventually graduated to Miss Tami at TLC for Kidz. Miss Tami readied him for kindergarten and was an amazing influence. He loved her dearly and we are forever thankful that she came into our lives.

Colby went to kindergarten and first grade at Dean Allen Elementary. Mrs. Lescosky recognized his special singing skills and asked if he could sing a solo song in the Christmas program. Nonnie sewed him a teddy bear costume and he sang his heart out for the entire school.

In second grade, Colby moved to Pioche Elementary and then moved on to Meadow Valley Middle School. Colby was a constant Honor Roll Student with straight A grades most of his life. He loved making his classmates laugh and was always known as a kind kid who loved his friends. Just a few weeks ago, his favorite teacher, Mrs. Zierow, wrote: ?Colby is a great kid with so much potential! He has some natural leadership ability that I encourage him to tap into. I enjoy having him in class.?

Colby loved his time with friends at Pioche Elementary, especially all the field trips. Most of all, he loved the sixth-grade trip to Washington, D.C., with his Nonnie and Papa. He and his classmates visited Arlington National Cemetery and helped place thousands of wreaths on the graves of fallen soldiers. He visited the theater where his favorite president, Abraham Lincoln, had been, and all the national monuments and museums. Colby proudly boasted to everyone that he could travel on airplanes and navigate airports and subways like a pro. The trip was a little bit like Disneyland to him, and we are forever grateful to Lincoln County School District for providing that once in a lifetime opportunity.

Colby and his Papa were two peas in a pod. Papa was Colby?s baseball coach every year, as well as his hunting, trapping, and fishing buddy. One of their favorite spots was Sunnyside. After a day of hunting, trapping or fishing they loved to swim in the hot springs and then sit around the fire, listening to the coyotes and searching the sky for shooting stars. At the end of each trapping season, Colby and Papa went to the fur sale in Fallon. He loved spending time with the other trappers and listening to their stories. All the time spent with Papa in the outdoors cemented Colby?s love for nature. The last couple years, he was allowed to visit the Eagle Valley Reservoir alone and fish from the dock. Last year he went on a special fishing trip to Alaska with Nonnie and Papa for their 40th wedding anniversary.

Colby also loved to spend time with his Nonnie. He would sit on the front porch with her, drinking hot chocolate and talking about life. They liked to take drives on the quad or Ranger and go geocaching. Colby was proud to drive whenever she would let him.

Colby loved his Aunt Becki and Uncle Jake. He especially liked to send Becki funny jokes and memes and would debate anything with her. But most of all he liked sitting as close to her as he could and just feel her love. She was an important part of his childhood and was always there to support Colby in anything he needed.

Colby gained a new uncle when Becki married Justin. They shared a love of history. He was so happy when Justin made a poster for him to advertise his little nightcrawler stand in Eagle Valley. Colby would gather worms at night from the apple orchard and sell them to the fishermen headed up to the reservoir, three miles from home.

Jake was the big brother Colby never had. The summer before fifth grade, on a trip to the Arizona Ranch, where Jake works, Colby decided he was going to be a cowboy. He asked for western shirts, jeans, a belt with his name on it, boots, and a hat. He also begged for a horse.

Jake bought him his first rope and taught him how to throw it and Colby practiced both on a homemade roping dummy in the front yard and on any person, cat, or dog that got close enough to become his target.

Colby loved to take Jake?s wife, Kailey, on hikes in the hills above the cabin. He wanted to show his aunt all his outdoor skills. He was also proud he could start a fire without matches and spent hours making paracord survival bracelets.

One of the proudest times in Colby?s life was when he became Layla?s big brother. He tenderly held her in his arms with such love and fascination. They had your typical brother and sister relationship, he the big tease, and she the tattling sister, but under it all was the love that every sibling understands is forever and unconditional. Colby nicknamed her Chip and she called him her Bubba.

Colby loved his mama most of all. He would cuddle next to her and talk for hours about everything under the sun. He was very proud of everything she was accomplishing for him and Layla. She loved his sense of humor and was so proud of the man he was becoming. They also loved the outdoors together and especially time at the beach. They planned to go camping for his birthday and he was looking forward to using all his outdoor skills to show her just how much he knew. He would no doubt identify every animal track that they would come across and tell her what direction they were traveling in.

We would like to thank our friends and family in Las Vegas and Lincoln County for all of their love and support during this difficult time. They say it takes a village to raise a child and there is no doubt Colby had the best village, full of loved ones that adored him from the moment he was born. His family is so proud of all he accomplished in his time with them and they will live always with infinite love in their hearts for the young man with a heart of gold.