You are here: Home / Archives for Benjamin Jenkins 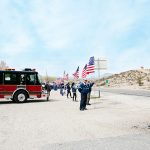 Upwards of 40 vehicles or more spread out along both sides of U.S. 93 near the Sinclair station and up to the electric car charging station in Alamo … END_OF_DOCUMENT_TOKEN_TO_BE_REPLACED